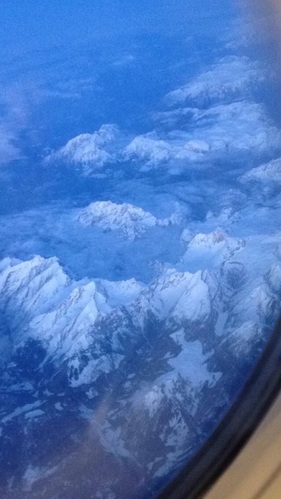 On this day, I came in to school with everything I needed for the day, including my suitcase, passport, etc. Halfway through the school day, I set off to the airport from school with my sister, Olivia, Mr Boyle, Mrs Clifford and Izabella. When we got to the airport, we sent our bags off to be taken to the plane. Then we got some food from Burger King while the teachers ate in a café around the corner from us. We stayed in the airport for a few hours to wait to board the plane. In this time, me, Olivia and Izabella looked around the shops in the airport and Olivia bought some perfume. After we boarded the plane, we took off at around 4pm English time, had around a three hour flight and then landed in Greece at 9pm Greek time as Greece was two hours ahead of England. The flight was an experience for Izabella because she had never flown before and she got worried every time there was turbulence which made me and Olivia laugh. Also, we flew over the Alps which was a very beautiful sight to see.

After the flight, we had a taxi ride for around 25 minutes to Thessaloniki, a beautiful city in Greece which was right on the coast line. The hotel was very big and looked beautiful in the lounge and our room was amazing. Also, in the lounge there was a woman playing the piano which made the hotel seem even nicer. We then put our cases under our beds, not quite unpacking as we were only there for one night, and went down to the restaurant. We had quite a shock when we went in to the restaurant because people were smoking inside of it which is illegal in England. Everyone apart from me ate a chocolate tart which they treated as if God had made it with his own hands! I regret not eating it now because of the way they described it! We then drank lemonade that the restaurant had made themselves. They put so much effort in to it, in England you would usually have store-bough lemonade served but this one had been made from real lemons and tasted better.

We finished in the restaurant quite late, around 11:30 and we went straight to our rooms as we were all so tired. My sister and I then FaceTimed my parents and Izabella went on Skype to hers. Olivia and Izabella were already missing home but I was that excited about the week ahead, I didn’t mind. We all went to bed then and I kept talking to Izabella in my sleep and making her get me things while I was sleep talking. Whenever she would wake me up to give me what I asked for, I would be confused and say I never asked for it which annoyed her because it was around 3am. That made me laugh when she told me in the morning. On this night, I was ill because Izabella was ill the night before and I had caught whatever she had. 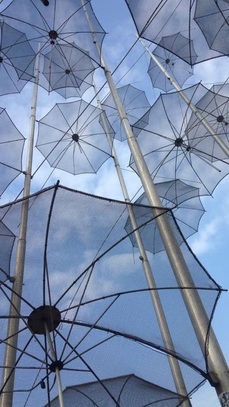 We woke at around 8am, re-packed our cases and met Mr Boyle and Mrs Clifford in the hotel lounge. We all had breakfast before we went to the other hotel in Xanthi. The breakfast was so much healthier compared to an English breakfast. They served lots of fruit and even vegetables for breakfast and had a lot of fruit drinks too. I thought we were quite healthy in England but when I saw what the Greeks served, I was shocked. Then we all met Aliki in the lounge and she took us on a tour of Thessaloniki where she said she had lived when she was a student. We were stopped and grabbed by men selling bracelets in the street. It was so scary because they wouldn’t leave us alone! We walked along the coastline of Thessaloniki for a few hours and stopped at a nice, little café where we drank hot chocolate. We saw this art piece near our hotel that was made up of umbrellas and I got a really great photo of it! It was so pretty.

Then we went back to the hotel to get our suitcases and made our way towards the bus station in Thessaloniki. The bus ride was very long and tiring. We stopped at a service station to eat and I got some Greek chocolate while I was there. It was really delicious. The bus ride was around 3 hours and I sat with Izabella. Everyone, except me and Izabella were sleeping so to pass the time, we made up some games to play. The man in front of us was in a bad mood that day and he kept shouting at me and Izabella. When we got to Xanthi, there was snow on the hills which confused me because I thought Greece had a tropical climate all year round. I learned that I was wrong later on in the week!

When we arrived at Xanthi, Vaggelis’ mother and one of the teachers showed us around when they were driving us to the hotel. They were really nice and they answered all of our questions. When we got to the hotel, we went to our room to put our cases in there and then we went out for a meal at a small restaurant in the town.

The restaurant was really small but it was so cute. The food was really nice too and I tried Tzatziki (A Greek yoghurt and cucumber dipping sauce) which was really delicious. I kept dropping everything though; my fork, my phone, my knife, everything! Also, a couple in the corner of the restaurant didn’t stop kissing each other the whole time we were there. It was so awkward.

At around 9pm, Vaggelis, Eva and Illias picked me, Olivia and Izabella up from the hotel to take us to a café in the town where Odysseas Lomvardeas, their friend, was having his 17th birthday party.  It was strange and awkward at first because nobody knew what to say to us but then Eva’s friend, Déspoina, started to ask us lots of questions so it got better.

We got back around midnight from the party, it was fun in the end. We all then video-chatted our parents before going to bed.

I was in awe because the questions were long formulas and algebra. She is very smart. In the History lesson, the class were supposed to have a test but I got the students out of it because their teacher spent the whole lesson getting students to ask me about what it is like to live and grow up in England. They told me that they were grateful that I was there because I postponed the test! I was in History with Eva’s friend Maria because Eva was preparing for a presentation that she was speaking in that was going to be in front of all of the other exchange students that had arrived from England, Denmark, Turkey and Romania. She did such an amazing job with the presentation especially when she was telling me in the morning that she was nervous.

Then we went bowling. I was winning at the start of the game but then Illias and Vaggelis put my bowling skills to shame. The woman misheard us when we told her what names to put on the score board so we played as: Eva, Olivia, Izampela, Vaggelhs, Hlias and Emili. When the game was over, the final scores were:

Then we went to a small restaurant around the corner from where we went bowling and I ate Souvlaki and Tzatziki. It was so delicious and I would eat that again. In my opinion, Greek food is so much nicer than English food because it is tastier and they have healthier food.
The church had paintings of religious images all over the walls which made it look beautiful. The crosses and the craftsmanship of the entire inside of the church was breath-taking and I wish there were places that beautiful in England.

Vaggelis and Illias went to afternoon classes at the school so when Eva had finished her presentation, she took me, Olivia and Izabella out shopping for the afternoon. It was so nice and she insisted that she buy us drinks and ice cream. She was so generous and kind-hearted.

Then we went to a Greek concert where tradition Greek bands, choirs and singers performed and at the end, people got up from the crowd and started doing Greek dancing around the audience. Izabella, Olivia and I joined in with the dancing. It was so fun and it took me out of my comfort zone!

Then we went back to Eva’s home and her mother made us a traditional Greek dish which was a mix between pasta and quiche. It was delicious. Her mother was a great cook.

After that, we went on a hike in the hills of Xanthi with the other students and the teachers. It was a great nature walk and at the end, we went star-gazing. Mr Boyle let me try this drink that he had and was being handed out. It was strange but oddly delicious. We looked through a telescope at the stars and the sight was beautiful. The temperature dropped to -2 degrees and everyone was so cold! When we were waiting for Vaggelis’ and Illias’ parents to come and pick up Izabella and Olivia, Eva’s dad let us warm up the car as he stood watch for them.

What I learned with the Comenius Project:

There are so many things that the Comenius project has taught me. It gave me confidence to interact with new people and take myself outside of my comfort zone. It helped me make new friends whom I love as much as the friends I have in England. Also, it helped me gain a better understanding of what different cultures, places and communities are like. It not only taught me about the Greek, Danish, Turkish and Romanian culture but it also taught me about my own culture and how things are different in different parts of the world.

I will miss everyone that I met in Greece and if I had the chance to do this again, I would do it with no hesitation. I thank everyone who made the trip possible and everyone who participated.
Proudly powered by Weebly